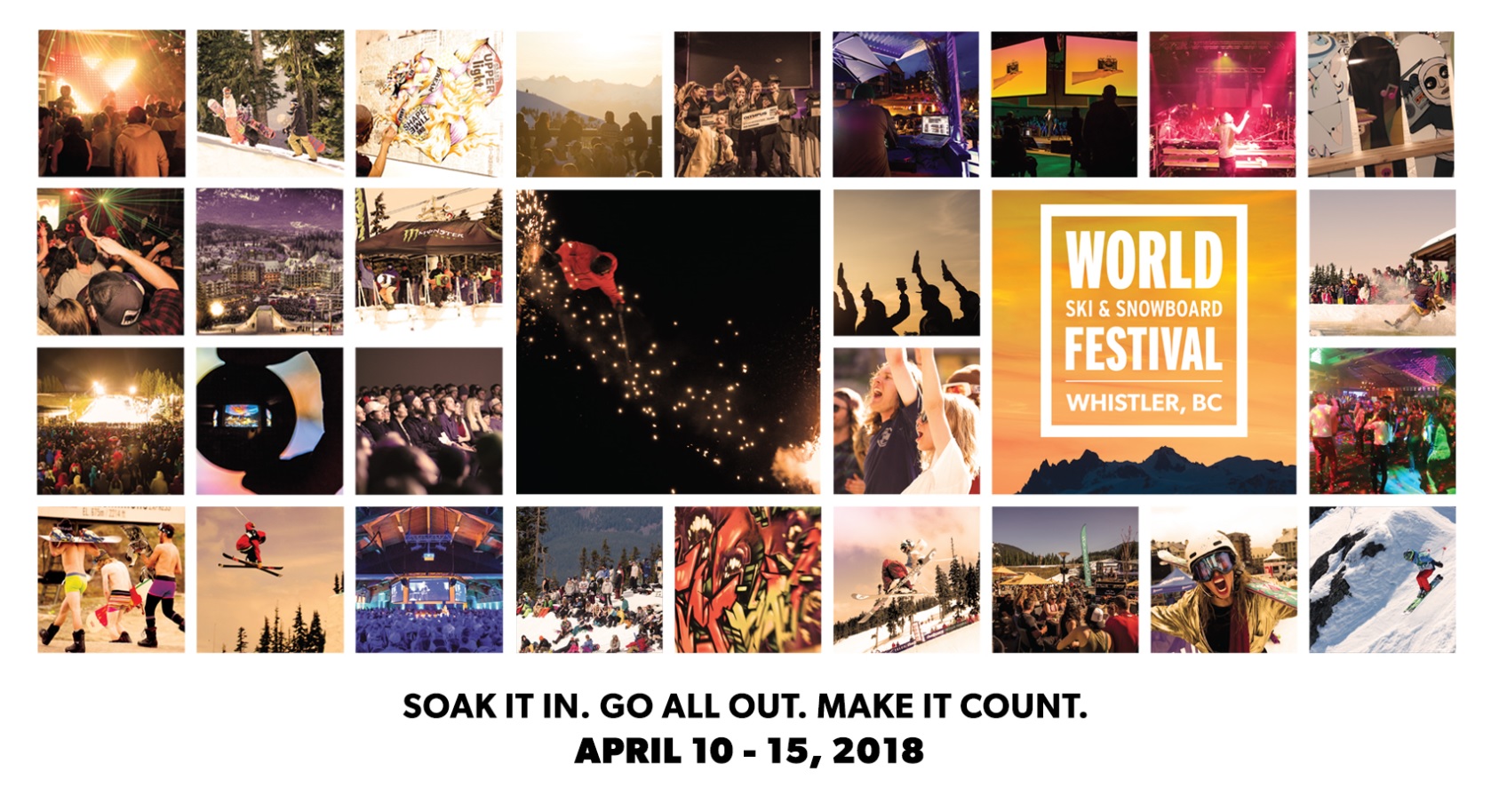 The upcoming Telus World Ski & Snowboard Festival is going to be nuts, We can’t make it this year but you can see all the details in this blog post!

Suggested Tweet: Keep that Olympic spirit going at #WSSF with the return of the Saudan Couloir Ski Race Extreme, Boarderstyle World Championships, and the last Big Air of the season:

Witness the return of the Saudan Couloir Ski Race Extreme, Boarderstyle World Championships, and the last Big Air of the season, April 10-15, 2018

WHISTLER, CANADA, MARCH 1, 2018 – It’s been electric. We’ve yelled at the TV, cried happy tears, high-fived strangers, and felt the pangs of victory and defeat as if they were our own as we’ve watched athletes take to the slopes, tracks, and skies to prove themselves. You might be missing that daily dose of exhilarating sporting action, but fear not. WSSF is keeping the energy high right until the end of winter. With a renewed focus on sport they’ve got athletes from around the world descending on Whistler with the return of the legendary Saudan Couloir Ski Race Extreme presented by Kokanee, the final round of the Monster Energy Boarderstyle World Championships, and the signature Big Air Competition.

Registration is now open for the legendary Saudan Couloir Ski Race Extreme presented by Kokanee and anyone who thinks they will make it down in one piece can grab a bib. Note that it’s not for the faint-hearted or the weak-thighed. Lovingly described as an event that will “tighten your sphincter,” it’s 2280 feet (695 metres) of thigh-burning terrain, at times, at a 42 degree angle, from the top of the Saudan Couloir to the bottom of Jersey Cream. To mark the occasion, legendary extreme skier Sylvain Saudan, for whom the run is named, will be descending on Whistler to take in the action. Plus, Olympians, pros and racers, past and present, are queuing up to tackle the infamous course, including Canadian Olympian Robbie Dixon, who’s already thrown his name in the hat.

The race started in the 80’s when Blackcomb and Whistler Mountains were competitors. Blackcomb Mountain was looking for an event with the “wow” factor, and they found it. The original poster design, by Brent Lynch, depicts a fighter jet pilot in a full oxygen mask, which sets the tone perfectly for a race designed to test the limits. These posters can be found in homes up and down the valley, and this year it’s the turn of Morgan Jeske to create the new run of this famous design.

There’s $20,000 in cash and prizing up for grabs and race day will be either Friday April 13 or Saturday April 14 as the event organizers look for the best conditions possible. It’s a one shot, one day race that will result in some spectacular shows – whether that’s the podium or yardsale kind.

There are pro male and female classes, and the amateur section is divided by age.

Hungry for more? The Monster Energy Boarderstyle World Championships is making it’s last stop in Whistler this year to crown the Champs. This event is all about high-energy creative riding that wows the crowds with the finalists being announced after Friday’s runs, and the finals taking place on Saturday afternoon. And if that’s still not enough action, on both Friday and Saturday night join a crowd of thousands at the base of Whistler Mountain as athletes throw down their moves as they launch themselves off the last Big Air of the season.

So there’s no need to feel blue after the end of the 2018 Winter Olympics because there’s plenty more action to be had, and you might even spot a few newly-minted athletes in the event lineups. Check out the full lineup of events at WSSF.com and make sure you sign up to our newsletter (bottom of home page) to get the latest scoop on what’s happening.

Interested in covering WSSF? Please fill out this media accreditation form and we’ll get back to you asap: https://goo.gl/Wm5Pnm

10-15, 2018. Get fired up for the return of the Saudan Couloir Ski Race Extreme presented by Kokanee and the finals of the Monster Energy Boarderstyle World Championships. Soak in the best of winter culture at the Olympus 72hr Filmmaker Showdown, Olympus Pro Photographer

Showdown, MULTIPLICITY, Art & Soul, and Intersection. Get loud alongside DJs spinning as hard as the athletes are sending it in the Ski and Snowboard Big Air competitions, keep the party going through après sessions at Whistler’s renowned restaurants and bars, then go out with a bang at The END, the famed final send off to WSSF.

This is the après of your season.

Soak it in. Go all out. Make it count.